Discover the Arkadi Monastery with its vivid history , find yourself relaxed in Matala Beach , explore the villages of Spili & Agia Galini 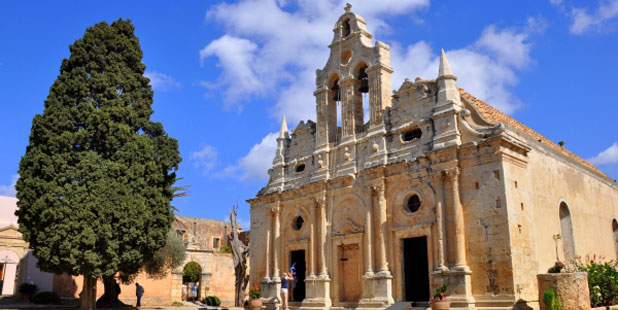 In this excursion , you will discover one of Crete's historical event that took place during the Ottoman ruling; the revolution in Arkadi Monastery inspired people in Europe and generally in world including the famous French novelist Victor Hugo.

The first written tribute dates to the 14th or 15th century. Arkadi is a monument of the faith and struggles of Cretans for liberty. It has been recognized as a world monument of freedom (European monument of freedom, UNESCO), and a symbol of martyrdom and resistance against the foes coveting another people’s land.

Arkadi, which is probably the most well-known monastery on Crete, impresses with its architecture and magnitude that makes it stand out of its surroundings.

The historic moment of November 1866.

In 1866, the Revolutionary Cretan committee had stopped by the monastery and orchestrated the big Cretan Revolution that had the motto “Union or Death” fighting for the liberation of Crete and union with Greece. More than 600 women and children and almost 300 warriors had resorted to Arkadi.

Our trip to Crete's wonderful history continues with the visit to relaxing Matala beach; Matala was a famous destination at 60's for the hippies movement, an inspiration for songs by Cat Stevens and Bob Dylan. You will definitely enjoy the relaxing free time at the beach , seeing the artificially carved caves that date through Minoan Period.

Last but not least, Spili Village and Agia Galini are going to offer you a variety of choices to eat , drink or make a stroll in their beautiful and vivid alleys.