Departure from the Entire Chania Area . Pick up from your Hotel-Book Now 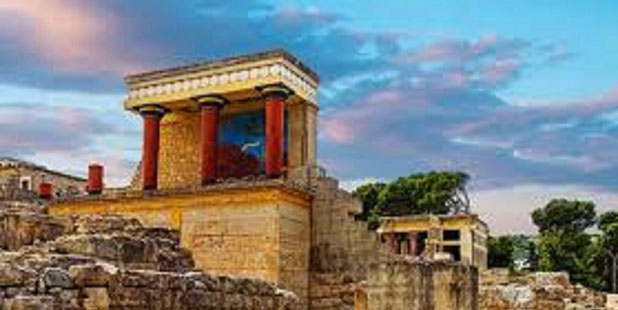 In this Excursion, we go to the capital of Crete, Heraklion. The route takes about 2hours. The guide will speak to us about the Minoan Civilization, Associated Greek Mythology and the excavations of Knossos Palace.

Halfway through our transfer to the palace we stop for a refreshment break to Rethymnon for approx 20min . We arrive at Knossos Palace at about 10:15. Here you will be greeted by the official guide and the tour will begin. This is where European civilization began, an era ruled by powerful King Minos, a place full of myths and legends, (think Theseus, the Minotaur and the Labyrinth). The layout of the palace was so complicated, the courtiers needed a plan to move through it. Flourishing between 3,000BC and 1400BC, it strangely disappeared, only to be discovered again by the English archeologist Sir Arthur Evans at the turn of the century. Now partly reconstructed, blood red columns and gigantic double-headed axes are a vivid reminder of this forgotten and disappeared race.

Afterwards, the bus will take you to the city center of Heraklion. Here, you can explore the streets of the city and walk in the old town. You can make your shopping in the vast array of shops, browse through the vegetable market or go sightseeing at the venetian harbor with its many fishing boats. If you want you can visit the part of the museum that is not under construction. In all cases you'll enjoy yourselves.

The price does not include: